It is reckoned that about 300 million people throughout the world drink CocaCola every day. It was invented by Doctor John Pemberton of Atlanta, Georgia, in the USA. He had set out to create a medicine that cured hangovers!

Pemberton knew that people living high up in the mountains of Peru and Bolivia chewed the dried leaves of the COCA bush, mixing them with a little lime or wood ash. That mixture acted as a stimulant, especially in the low-oxygen atmosphere of the Andes mountains. Pemberton started his drinks mixture with these coca leaves.

The COLA tree is found in tropical countries, and produces seeds (called nuts) that are about 2.5cm (1 inch) long. The brown seeds smell like nutmeg but are bitter, and contain tannin (also found in tea) and caffeine (found in both tea and coffee). Cola nuts are also chewed as a stimulant.

Pemberton mixed together extracts from the coca leaves and the cola nuts, adding some secret ingredients of oils and juices which, together, made a syrup. He named the concentrated syrup “CocaCola”, and people added soda (or fizzy water) to it. He patented the name, but only 112 litres of the drink were sold in its first year. Pemberton sold most of his Coca-Cola shares because he needed the money at that time. Shortly afterwards a businessman called Asa Candler bought up all the shares, knowing that what was needed was advertising. The drink began to become popular.

In 1899 two baseball fans, Benjamin Thomas and Joseph Whitehead, realised that huge quantities of Coca-Cola could be bought and consumed at sports stadiums. They bought the exclusive rights to bottle and sell the drink, and then Coca-Cola spread throughout the United States. Thomas and Whitehead and especially Candler became very rich. Candler had paid 1,000 dollars for all the Coca-Cola shares. 25 years later, in 1912, he sold them for 25 million dollars.

Coca-Cola was soon produced in many countries. Tomorrow, 31st August, marks the anniversary in 1900 of Coca Cola being introduced into Britain.

The secret of the success of Coca-Cola and most other products has been the advertising, but, of course, we do need to be selective and not be taken in by everything that is designed to catch our eyes.

Lord Jesus, in the world that you love so much we are surrounded with advertising on the streets,

in magazines, on TV and on the Internet - all trying to convince us of ways of enjoying ourselves and becoming likeable and popular.

Keep our vision clear and show us how to distinguish between what is shallow and what is of lasting value. Inspire us to choose ways of deeper happiness that lead to fullness of life. We ask this of you who said: “I am the way, the truth and the life”.

We are very pleased to advise that Miss Emma McDonnell has returned home to continue her convalescence. Emma will continue rehabilitation as an outpatient but she was very excited and happy yesterday to be able to return home with her Mum. Please continue to keep Emma, her family and friends in your prayers as she continues along the road to a full recovery.

Well done to our public speakers who competed in the Western Region championships last week. All spoke beautifully and did themselves and our school proud.

Congratulations to Angus Hunt and Declan Brown who have made it through to the Archdiocesan competition which will be held in Queanbeyan on Thursday 20 September. We wish Angus and Declan all the very best and know they will give it their all!

We are currently having a huge crackdown on swearing. It has become noticeable that students are tending to swear more than they used to and are not as aware of where it is completely inappropriate. All students have been told that it is always inappropriate to swear when at school and that we want our students to have the best reputations possible – this includes using their best manners, being considerate and respectful of others and therefore NO swearing whilst at school or wearing our school uniform. In discussing with students, all agreed with me that what I was asking of them was fair and reasonable. Any student heard swearing is currently being sent immediately to me during lunch and/or recess. We have noticed an immediate improvement and thank our students for following our school rules. We would greatly appreciate your support with this matter.

School photos will be taking place on Tuesday 11 September. Please ensure your child is in full winter uniform, with shoes polished and looking their best for the day. Normal school uniform rules apply and students are not to wear extra makeup or jewellery, etc on the day. Year 10 students are to wear their usual winter uniform and bring their rugby top. Please ensure your child/ren arrive at school on time so that they don’t miss out.

Thank you to everyone who has submitted their enrolment forms and intentions for the 2019 school year. Staffing processes for 2019 have commenced and it is imperative that we have the correct student numbers to Catholic Education to ensure that we are allocated the correct staffing. If you have not yet returned your intention letter, please do so by Monday 3 September (Year 6 to Year 9).

The uniform committee met on Monday 13 August and made several decisions. The first is that we will now have a Primary girls summer uniform which provides an alternative to the school dress for those interested. The school dress remains part of our uniform. The addition to our Primary girls summer uniform is Midford Girls School Skort (Product code 7000G) in navy with Midford Girls short sleeve Peter Pan School Blouse (Product code 5045) in sky blue. Girls are able to choose to wear this uniform from the beginning of Term 4 2018. 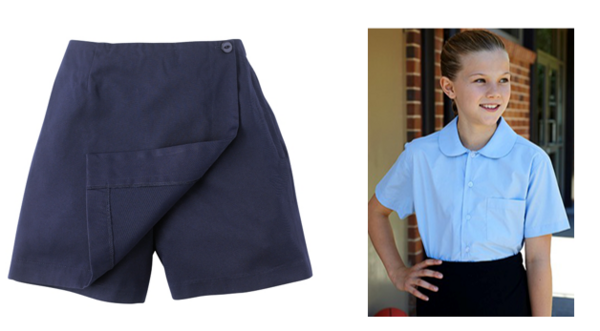 Senior (Secondary girls) will also have the skort option and we will no longer have the culottes. (Culottes will be phased out over next year). The senior skirt will remain an option.

The second is that we have tentatively agreed on the LW Reid sports short in navy as our sports short. We are awaiting a larger size for our older students to try and if that is found to be comfortable then we will move forward with these shorts as the only option. A decision is yet to be finalised as we need to ensure the cut is right for our larger students. The shorts are available in size 2 to 3XL.

Thank you to everyone who supported our drought relief appeal on Wednesday. We have donated $1000 towards the Burrumbottock Hay Runners drought relief. For more information about this great cause see https://hayrunners.com/

Robin in the Hood – School Production

Tickets go on sale for cast members on Monday 3 September and for everyone else on Tuesday 4 September for our spectacular “Robin in the Hood”. Students and staff have been rehearsing, planning, sewing and creating props over the past months in preparation for our much anticipated bi-annual play. Evening shows will be on Thursday 27, Friday 28 and Saturday 29 September from 7pm. Please purchase tickets early to avoid disappointment! Tickets available from the front office. 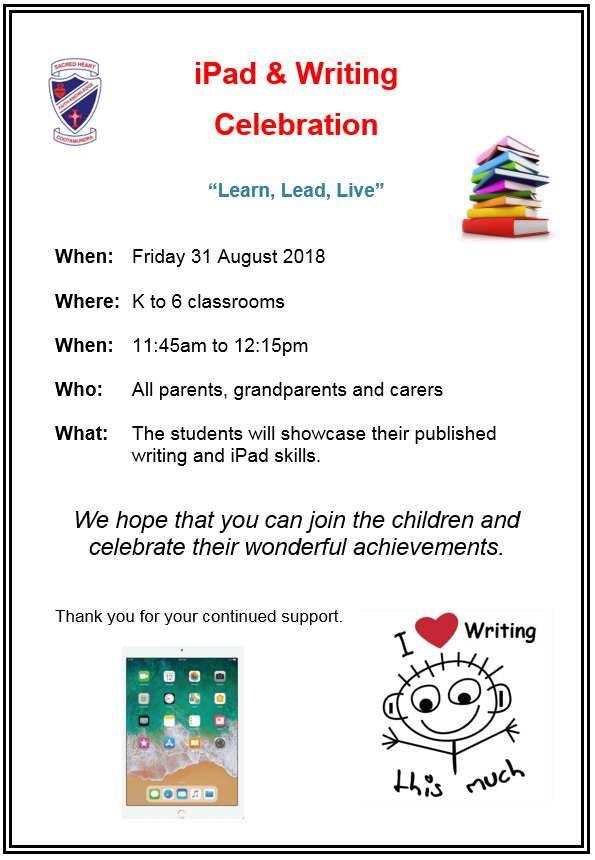 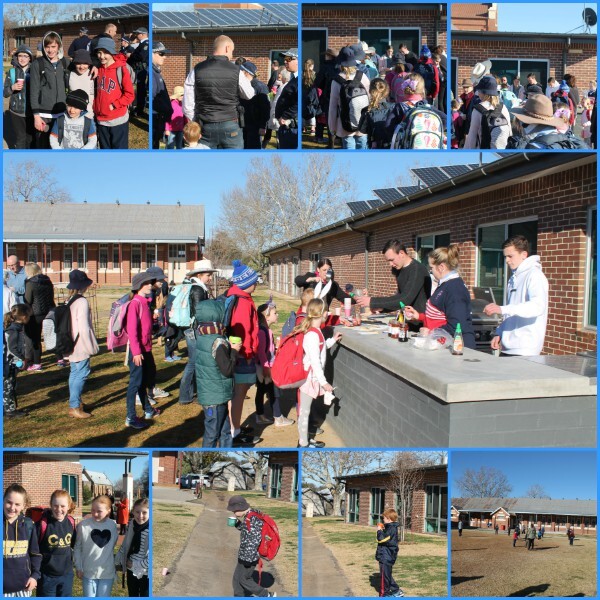 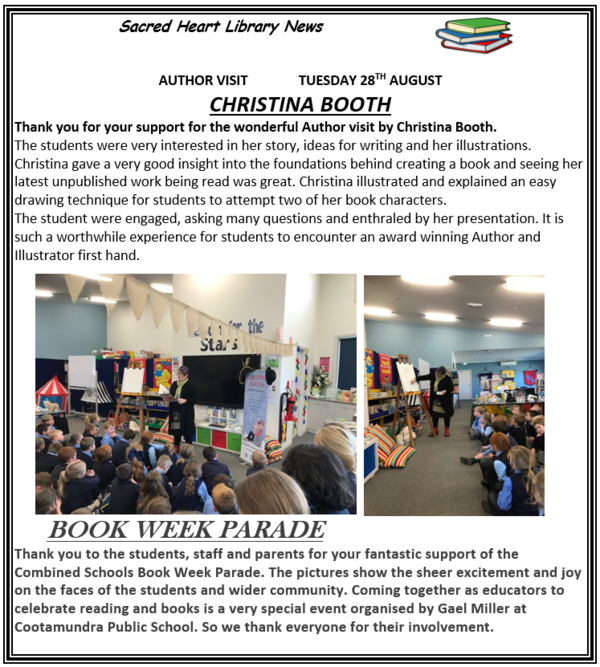 From the Class Room 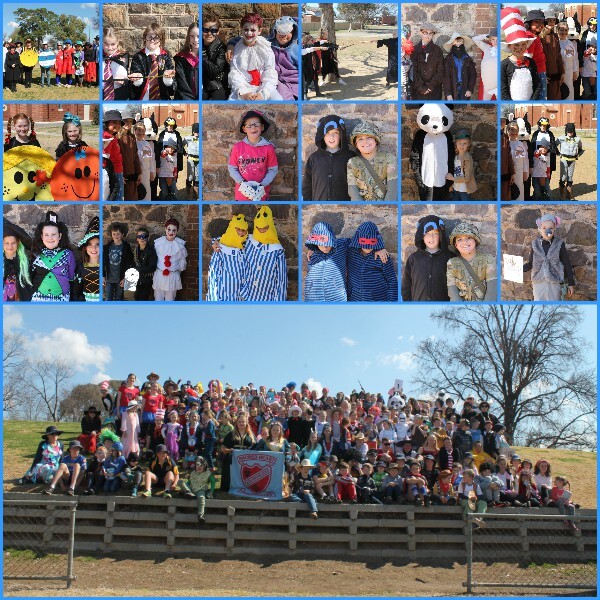 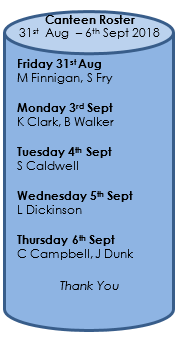 The Canteen is in need of helpers for the following dates:

If you can spare some time for these dates please contact the Canteen during school hours.

Your help is much appreciated. 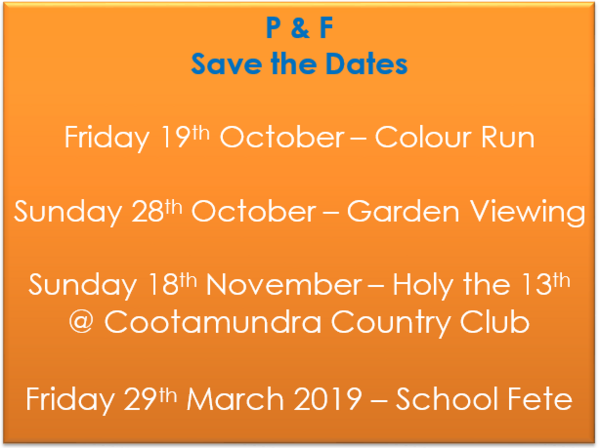 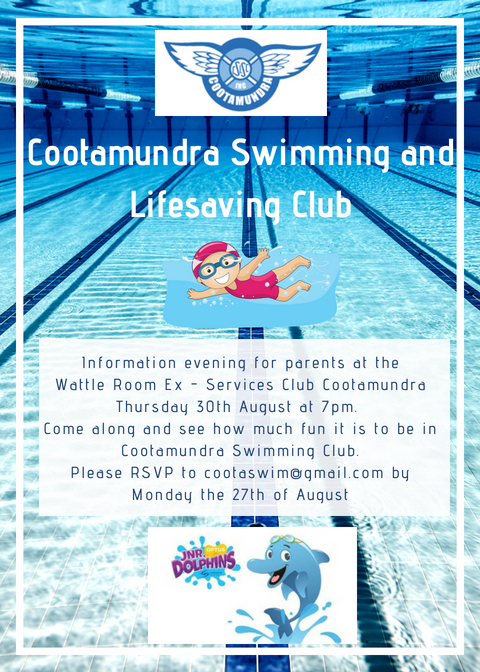 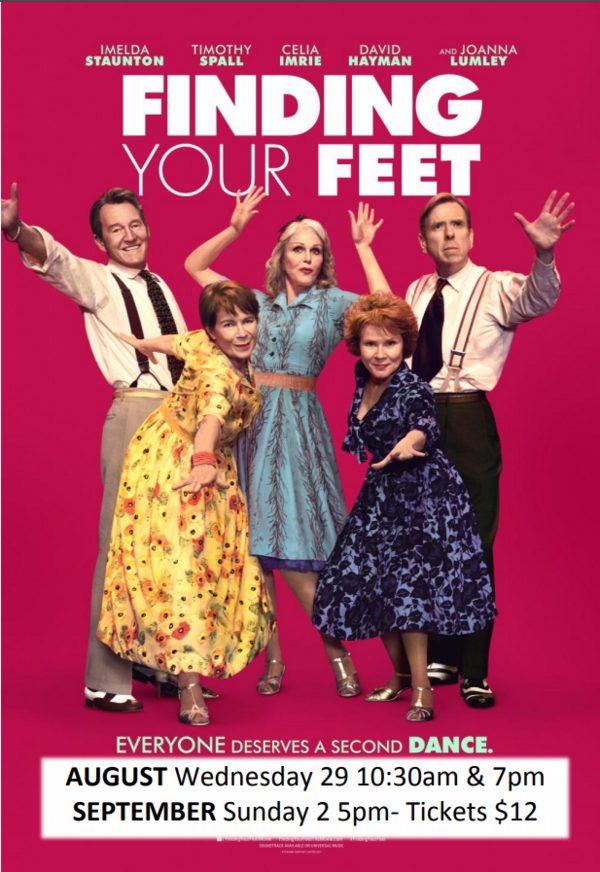 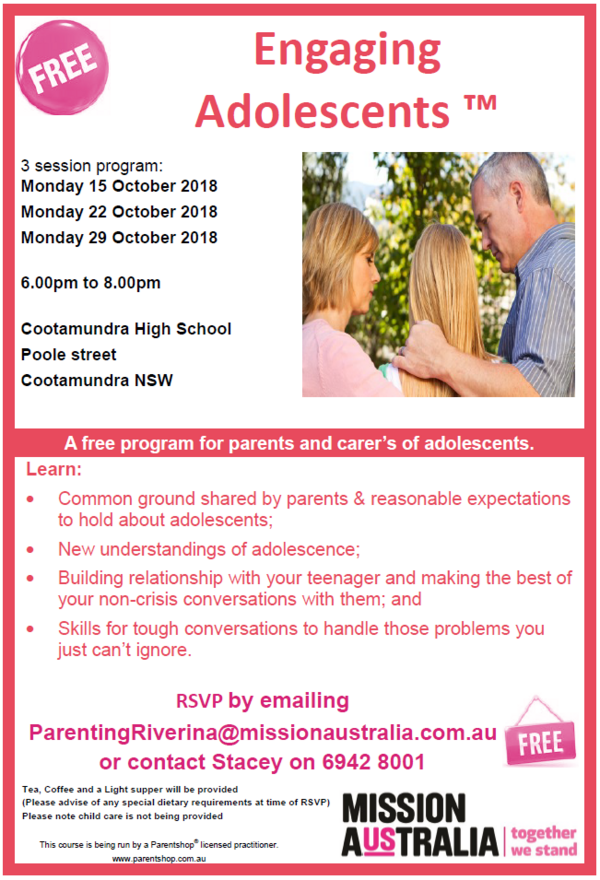