Catholic education was functioning in Cootamundra in 1870. Numbered among the first teachers are the names of Mrs Guery, Mr McCarthy, Mr Cod, Miss Mooney and Miss Partland.

In September, 1882, the Sisters of Mercy arrived in Cootamundra and in October opened a school with 75 pupils. Music tuition received great impetus in the early part of the century and became an outstanding feature of the education offered by the Sisters. Amongst those taught were the gifted Chapman sisters, Dulcie and Patricia, the Johnson sisters, Billie and June and the Hulford sisters, Judy and Janice.

In January, 1967, the two secondary schools integrated fully and became the Catholic High School, Cootamundra, with a De La Salle Brother as Principal and a Sister of Mercy as Deputy Principal. This was possibly the first trial for Catholic co-education in New South Wales.

Eventually the Brothers withdrew from Cootamundra and a lay Principal was appointed in 1977. In 1982, the school became a Central School and today Sacred Heart continues to provide educational opportunities for students from Kindergarten to Year 10.

The long weekend saw well over 300 visitors to Sacred Heart Central School, Cootamundra, to celebrate 100 years since the de la Salle Brothers started educating students and 131 years since the arrival of the Mercy Sisters. Visitors included past and present religious, staff and students.

The school boasts an illustrious and rich history commencing as a Parish school in 1870. It became a Sisters of Mercy school in 1882, de la Salle Brothers in 1913 and Sacred Heart Central School in 1982. The school claims to be the first co-educational Catholic school in Australia, having changed to a Catholic High School in 1967. Whilst the classes were coed, students were required to have separate playgrounds for girls and boys and the school still has design remnants from those days which clearly separate the play areas (although the students are now mixed on the playground!)

All attendees were keen to tour the beautiful grounds and were impressed by the vibrant and colourful classrooms and modern facilities. Stories of the past abounded and all were fascinated by the changes in technology clearly evident throughout the school. Many commented on the growth of the school which started with a single school room and has grown to accommodate 330 students from Early Stage 1 to Stage 5.

Current students were enthralled by tales of using slates rather than notebooks, iPads and Interactive Whiteboards, riding horses or in carts to school and having milk delivered for them to drink at recess. All enjoyed the fantastic display of old photographs and memorabilia which had been collated and beautifully displayed by John Connell. John spent many hours digging up the old treasures which were greatly appreciated by all. Current students couldn’t believe that there were not photos from all eras when the reason given was that photos were too expensive so many groups missed out as they could not be afforded. A far cry from almost all of our students taking photos daily with their assorted phones!

It was a wonderful experience to hear the beautiful memories shared and made throughout the 3 day celebration, particularly between current students and those from the past.

Unfortunately due to the latest COVID- Safe restrictions we are unable to conduct our Transition Program as originally outlined. This is disappointing for all our new students and families, as it has always been a wonderful way to preapre new students for the transition. We are hopeful that there is the possibility that we may be able to conduct the program in some form in the coming term. We will advise all families as soon as we are allowed to plan and conduct the programs. They will most likely be abbreviated versions but last year they were very successful.

At this stage we are also not permitted to have visitors on site for enrolment interviews or school tours. Once again we hope this restriction will be lifted when we return in Term 4. We will make contact to rebook interviews as soon as we are given permission.

We are very excited about all the new families and students who will be joining us and we are very lucky to inform the community that we have been granted two Kindergarten and two Year 7 classes. This is a wonderful opportunity for our new students to learn in smaller class groups. We are thankful to Catholic Education for their continued support of our school community. 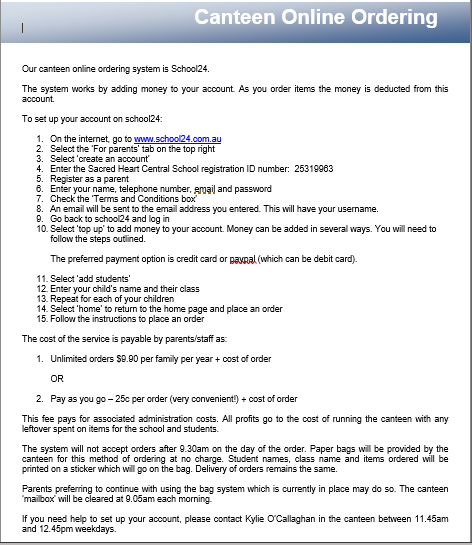 We are looking forward to the return of students in all year groups to our school from Monday, 13 September under Level 3 COVID settings. From the recommencement date all students will resume face to face learning and remote learning will no longer be available.

On site students must observe physical distancing, maintain COVID hygiene practices and stay home if unwell until a negative COVID test result is received. If a student is absent they can access their classwork independently through Google Classroom and/or SeeSaw. As well, Level 3 prohibits assemblies, parents/carers and visitors on site and limits some learning activities such as singing and excursions.

In addition, NSW Health has mandated that all staff and secondary students are required to wear a mask at all times at school for the foreseeable future. Students are therefore required to be wearing a mask when they arrive on site each morning and continue to wear it throughout the day. Students are encouraged to wear reusable masks. It is not feasible for the school to maintain a supply of disposable masks thatcan meet the demand if students forget or lose their mask. Given this limitation, it is important to stress that it is the responsibility of families to ensure that each student has a mask to be worn at school each day. It is therefore strongly recommended that students have a second spare mask with them in their bag each day in case their mask becomes damaged or lost. We encourage Primary students to wear a mask if they choose. It is not compulsory.

Students who travel to and from school by public bus service are also required to wear a mask during travel time, when they arrive at school each morning and while awaiting the arrival of their bus each afternoon. Thank you for your assistance in ensuring that our  students understand and adhere to all mandated COVID safe regulations and appreciate that their full cooperation with all Health Orders is a requirement of being on site. Together, we can ensure that we create the safest possible learning environment for all students at school

.
Year 7 to Year 10 will recommence their timetabled lessons from Monday.  Primary will resume their normal routines. The Canteen will be open when students return, however, the minimal lead in time may impact menu offerings in Week 10. Please prepare your children for this likelihood.

Finally, a heartfelt thank you to our families for your continued support as partners in your children’s education during the four weeks of lockdown and home learning. We have appreciated your encouragement, understanding and good humour and we are very proud of the way that our students have continued to engage with their learning (with your support) during this time.

This morning the Premier has announced that lockdown will cease from Saturday in our Local Government Area.

This is great news!

We are not sure yet what the Stage 3 restrictions will look like for school return. Catholic Education are preparing formal communication around next week's return to school that will hopefully be available later this afternoon. There are many asepcts that need to be taken into consideration.

Thank you for your patience and understanding and we will update you as soon as we know more.

During these unusual and challenging times we want to acknowledge what an amazing job you are all doing to support us in helping your children to engage with remote learning. To celebrate all that is happening in our home classrooms we would like to create a visual presentation of these learning situations. We are asking if you could please take photos, with your child/children, of those people (mums, dads, older brothers and sisters, grandparents etc.) who have helped your child or children understand and complete their tasks. Here are some examples of the photos you could possibly submit.

Please be aware that these photos will be used in a visual presentation that will be shown on our school Facebook page and in our newsletter. Please forward your photos to Patrece Maxwell-patrece.maxwell@cg.catholic.edu.au or your classroom teacher.

Today the NSW Government announced an extension of the current lockdown orders until 10th September. This essentially means that our schools will continue to operate in line with the stay at home orders for the next two weeks.

We are very appreciative of the support of our community over the past two weeks to help us implement the remote learning directives. We recognise that this is not an ideal situation for anyone; teachers, our students or their families but we are working to make the best of the restrictions and the challenging circumstances. Our school will continue to provide teaching and learning through the remote platform. The original directive that schools will be open for the children of essential workers remains unchanged. So too, the instruction that if students can be supervised at home then they should be will continue. Similarly, all staff must continue to work from home unless they are rostered on for supervision of the remote learning at school. There is no face-to-face teaching happening under Stage 4 restrictions.

The new directions have also sadly necessitated that we postpone the Year 7 and Kinder 2022 Transition dates for this term until a later date in Term 4 (dates to be advised). The Year 8 excursion to Tathra has also been cancelled. The Infants Swimming program has been postponed. Hopefully the new restrictions will mean that, in time, we will manage the spread of COVID-19 and we can return to schooling as normal as soon as possible.

In addition we have been advised that from Monday, 30 August 2021, masks or face coverings will be mandatory for all staff and students in Year 7 and above in all indoor AND outdoor settings on school grounds. It will also be mandatory for all staff and students to carry a mask with them at all times. Further specific advice to update school protocols including advice on masks will be available in the coming days.

We are very disappointed that the lockdown did not end as originally planned this week and return to face-to-face teaching but we will continue to support our students as we navigate this new extension. Please be confident in the fact that the teachers are working tirelessly to provide meaningful and purposeful learning for all students to maintain their development and progress. If at any time you need to discuss the challenges that you are facing with remote learning please contact the Front Office or the class teacher and we will strive to support our families and students.

Please remember to be kind to yourselves and to each other.